This is a Faceboook post I made the other day, because I’m honestly just bored with real life. (And I wonder why my FB friends think I’m a weirdo.) So… here you go. Enjoy! 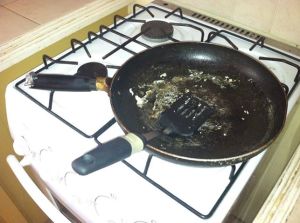 I inherited you from a long line of haggard SGU students who shared an insatiable hunger for morning …eggs and afternoon grilled cheese. Also, for scrubbing Teflon with steel wool and utilizing kitchen appliances for home defense. I only assumed this, of course, from the frenzied pattern of scratches on your surface and because there was a giant conical dent in your center that was the exact shape of the top of a human skull. Many times, I wondered what kind of event could’ve merited such violence, to hit something skull-shaped with a frying pan and MEAN it, at least enough to case a dent. And since SO (med school significant other) meltdowns–though legendary–are usually settled by much less drastic means (say, by purchasing a plane ticket,) I finally settled on mortal peril as the likeliest excuse for someone to maim you in such a way. At any rate, the dent that resulted was geometrically ideal for burning fried eggs and leaving them partially uncooked at the same time. A scientific marvel, that was. Almost magical, really.

But then there was your incredibly shifty, half-broken plastic handle. That, I’ll admit, caused me the most grief. In high school physics, we studied the concept of torque, and I remember asking myself when in the hell I was ever going to use that knowledge in my ACTUAL life. Fortunately, your handle was broken in such a way that I had to constantly monitor the angle of my wrist and the force with which I was lifting you up, otherwise you would seesaw wildly from side to side, effectively spilling whatever contents–usually, spaghetti sauce–you contained at that moment.

And let’s not even get started on how difficult it was to get you properly clean, while navigating those various dents and trying not to dump soap-sudded water from your questionable pan. The memories are still too fresh.

As frustrating as our time together was, though, I must admit that you taught me some things. Patience, for one. Also caution, humility, bravery and a very healthy respect for physics.

But most importantly, oh devious pan, you taught me gratitude. For a girl who was raised in a place where solid, dependable frying pans can be purchased at Wal-Mart starting around $5.99, dealing with you day after day was almost like a spiritual pilgrimage of some kind. I learned that for most people in the world, material possessions aren’t considered disposable, or even really easily replaceable. (Even if they are completely and utterly USELESS at the end of their life span, like you were.) And I should be better at making things last. Also, cooking.

So… Thanks for that.