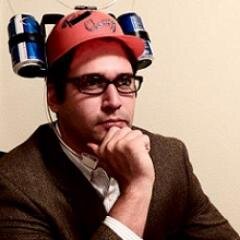 The 5 Stages of Writing on a Deadline

Writing, much like grief, moves in phases. The ideal process for artistic creation is the slow, gentle growth of an idea, watching it bloom from mere idle thoughts and become a cohesive, beautiful flower of a story. Then, of course, there’s writing on a deadline. This process is more akin to trying to steer a lawnmower while your drunken uncle fights you for the wheel and a swarm of honeybees swoops about, rightfully angry about the beer bottle your aforementioned uncle threw into their hive. If this analogy made no sense to you, congratulations on not living in the country. Point being, writing on a deadline is a crazy, often senseless process that feels as though your being swarmed by painful distractions. Though, to be fair, in a perfect analogy you’d be the drunk uncle. But I’m getting ahead of myself.

Stage 1: Stupidity, aka, I Can Totally Handle This.

This is a beautiful stage, a wonderful place that you’ll find yourself at time and again. You’ve found a project that you’re suited for and been accepted into the position. You have zero fear you can handle this, because the magic of repression has given you the power to block out what your last project was like. You do everything right in this phase, you make an outline, schedule time specifically dedicated to work on this project, and even make a step-by-step checklist. You are fearless, you have got this shit down cold.

In fact, you’ve got it down so cold, you’re not even stressing about it. That window you setup to work on the project gets chomped away by angrier, more demanding tasks that are further along in the process. Soon, all too soon, you’ve already hit crunch time and now you really need to write. So you finally enforce that window and sit down to truly punch out stuff on the keyboard.

Stage 2: Holy Shit, aka, What Was I Thinking?

Nothing. Not one idea. Come on, you can do this. You had a billion ideas when you took on the project. There has to be one left in your brain. Just one. You’ll do anything. Come on. Focus. Foooocus. Don’t look at the spot on the wall. It’s not mold. Because you live in a dry climate and also mold doesn’t look like finger smudges, that’s how I know. And now you’re cleaning the “mold” even though that’s totally not what it was. Feel better? Oh, hey, idea! No, not about the project, but related to the project. Remember that outline you did? Maybe there are some ideas in that.

Huh… this is wordy, detailed, and totally useless. Look at Point #4: Draw out deeper meaning of previous subject. They’re all like that. Everything hinges on something else, and there’s no start point. Okay, deep breathes. At least you’ve got a plan if you do ever think of a starting point. Look, there’s an old truth to writing that if you are stuck, just write anyway. Just put words down and sooner or later something cohesive will form. Type gibberish if you must, just type something.

Stage 3: Desperation, aka, Shit’s Bout To Get Real.

Well, it’s the last day before the project is due, and you’ve written 30,000 words of gibberish. I’ll be honest, I’m impressed with the dedication, though I had hoped eventually real words might come out. Still, let’s not give up hope yet. Maybe you can still pull something off. I mean, you’ve done this before. Go look at notes from old projects, perhaps the secret to breaking through your block lies in there.

Wow… these are… wow. I’m around ninety percent sure having this combination of words written down is a felony, along with a serious cry for help. Also, a good half of that isn’t English. Scratch that, it isn’t even language, at least nothing a healthy mind could identify as such. No, don’t throw it out, there are children in the world who could stumble across this. Burn it. Cleanse it with fire and hope there can be forgiveness in your next life. Only when that is done can we continue to scour for the key to unlocking inspiration.

Okay, those pages are gone, though it took them a curiously long time to burn, and the whole house smells like smoke and regret. After a bit more digging you’ve found different sets of notes from your last project. Let’s take a gander and see what you’ve got.

Eh, what the hell, seems like as good a time as any to progress to next step.

Step 4: Booze, aka, Hang On Just A Minute I Know What I’m Talking Here Shush Just Let Me Say One More Thing And I Will-  Zzzzzzz

If it was good enough for Hemingway, it’s good enough for you. Furiously hurling vodka down your throat like there’s a gasoline fire in your belly and you can no concept of how putting out a fire works, you take an alcoholic wrecking ball to your sober consciousness. Soon the ideas begin to flow, unfortunately they aren’t ideas directly related to the project you’re working on. No, texting your ex is a bad idea, they don’t want to hear from you. I don’t care how unhappy you think they looked in their wedding photo on Facebook, they don’t want to hear from- aaaand you’re texting anyway.

Several drinks later, you have worked through nearly all the alcohol stocked in your meager bar, save only for the break-in-case-of-emergency last resort: Tequila. You know you shouldn’t do it, but by Faulkner you’ve come this far and at this point you’d rather go down in flames than burn away gently. You guzzle straight from the bottle, downing the well-grade liquor in less time that it took for the under-paid clerk to slap it on the sale shelf. This is going to be bad.

The next few hours pass in a blur, only snippets and highlights will remain once the alcohol has run its course:

You remember trying to order a pizza on the phone, only for the clerk to consistently reiterate that you have dialed a dry-cleaner. You are not fooled by his lies.

You know you uploaded a clip to YouTube. Unfortunately, you have no memory of what was on it, the name it was under, or even the account you used to post it. You will spend the next six months trying to find it and/or hoping you cannot be identified by the footage. That hope will eventually be dashed.

You fill more pages with the cursed writing, the arcane script that made those previous pages so difficult to burn. This time you hide them so that your sober-self cannot unmake your hard work. There can be no more interruptions, not with the rising so near.

You sit down at your computer, staring at the monitor that mocks your literary impotence with an unsullied white screen. You stick your tongue out at it. This is the last memory of the night.

Stage 5: Completion, aka, Who The What Now?

As you rise slowly from the keyboard you become immediately aware of three things. Firstly, that you have a headache that would send lesser drinkers to their graves. Secondly, that you slept with your face on the keyboard and will wear this waffle iron-esque mark of shame for several hours. Lastly, and most importantly, your project is completed. The crisp, neatly edited words stare back at you from the monitor, all mockery quieted. You read through them just to be sure, but everything is germane to the topic, well-worded, and grammatically correct.

You send it off to the client without asking too many questions. Better not to know, you assure yourself, better not to ask what exactly those pages you keep writing signify, better not to wonder just what it is you might have traded away in a fit of drunken desperation.

Nope, instead you’re off to get a shower and a well-deserved bagel. Maybe you’ll even go see if there are any projects you might be a good fit for. After all, with this beast done you’ve got a lot of free time, and you really should try and stay productive.

Note from V: For more of Drew’s deadpan hilarity, please check out his author page and follow him on Twitter.
Also, keep an eye out for his side-splitting debut novel, The Utterly Uninteresting & Unadventurous Tales of Fred, The Vampire Accountant–available Summer 2014!!!